I don’t know why people always jokingly refer to Montana as Montucky. Is it really that similar to Kentucky? Is it simply because Kentucky is generally stereotyped as being highly conservative and rural and full of hicks? Because I don’t really thing Kentucky is like that. I mean, the Kentucky Derby is one of the most high-profile and classed-up events in the country,

and they even make a Barbie! Who knew?! Pretty sure Montana’s rodeo attire is a lot more casual… 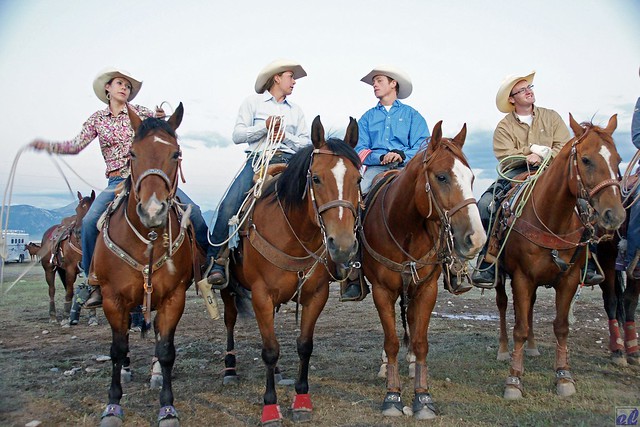 And of course, Montana Nordic skiing attire is the most attractive of all…

Because who doesn’t want to just lounge around in skiwear all the time?? ###teambonding###
Big shoutout to Craft Sportswear USA for the super awesome new uniforms. Comfort, class and superior function all around.

The skiing in West Yellowstone was pretty great. The snow was near perfect, with several small snowfalls throughout the 10 days we were there, comfortable temperatures and just great training. Racing was hard. I was super psyched and feeling energized to start this season, but somehow I just didn’t perform the way I wanted to in West and was much much further back in the results than I anticipated. I didn’t even make it into the heats of top-30 in the skate sprint, something that hasn’t happened in quite a while. That was pretty disappointing. In the distance race, I just didn’t have the speed that I needed and had some trouble with my lower legs, a chronic problem. Nonetheless, I did have some improvements in other arenas. In our training log, Erik has us write something that went well, no matter what our result said. I felt like I skied smoother than I had last year, especially skating. Just the ability to push the body harder, especially at altitude, seemed to be lacking. BUT, I reminded myself that it was the FIRST races of the season, and do I really want to be at my best at the beginning? No…but it would be nice to be skiing a little faster…

The ladies, Flora and mini-Flora (Oskar!) in West.

Having fun on a sunny recovery day ski in West.

The Flora clan joined us in West this year and never ceased to amaze us. Already getting after training at the gym!

Thanks to all my amazing equipment sponsors this year! Rossignol, Toko, Craft, Rudy Project and Skida. Photo: Ian Harvey/Toko US

The Bozeman races went off a bit better. After underperforming in West, I was really looking forward to some good classic racing in Bozeman.

Bozeman seems to operate in extremes…at least from what I have seen over the past 4 years racing there in early December. Either it’s wicked cold to the point that you wonder if you have enough clothing (a la 2013 when I raced in my warmup clothes because there was no way I was only going to wear spandex) or it’s crazy warm and the snow is quickly disappearing. This year we hit the high end of the spectrum with temps in the mid-30s and a lot of rain hitting Bozeman leading up to the races. Ironically, the first day we showed up for training at Bohart Ranch, the course was bulletproof ice and Erik wouldn’t let us train until two hours later after the (amazing) Western sun had softened the snow a bit.

On both race days, the situation was the same. Courses so frozen it was scary and relatively unsafe. Many a skier wiped out on a sketchy downhill corner from the top of the sprint course in the qualifier, a corner that later in the day during heats became a just-as-sketchy lake that would grab your skis and almost make you wipe out again. Like I said, extremes. Funny enough, I actually tripped myself herring-boning an uphill and fell on my hands and knees…but stayed on my feet on the downhills! I made it into the heats, moving from quarters into the semis by way of a “lucky loser” time (fastest time not in top-2 of each heat), but the conditions changed dramatically between quarters and semis, and in the end my skis didn’t run as well in the sloppier snow and I didn’t move on to the finals. But I cheered hard for my teammates Becca and Rosie as they raced for the win, with Rosie crushing the field start to finish. At least it was a nice warm sunny day.

In a good position during my quarterfinal

Coming off the sketchy downhill corner. You can see the giant puddle just behind us. They rerouted the corner wider during heats to avoid it.

Rosie crushing the final; no one in sight as she comes into the stadium.

Enjoying the sun in Bozeman with PK!

Again on Sunday we arrived to a trail of ice ice baby. With a lot more steep downhills and corners on the distance course, officials deemed it quite unsafe and delayed the start an hour to let things soften. It didn’t make too much of a difference and it was still a crazy course. I’ve never skidded and snow-plowed so much in a race as I did that day, and I’m usually pretty confident and competent on downhills. It was mass-start and it was difficult to get towards the front of the pack from my start position, so I skied a bit further back than where I wanted to be. I ended up skiing with my teammate Jess for most of the race, as we slinky’d back and forth with each other; she had faster glide but I had better kick. It’s always fun to ski with teammates. My favorite moment was probably at the top of the very last massive hill that was minutes long and all herringbone when a Canadian girl in front of me started walk-herringbone instead of run-bonin’ it, and I couldn’t get around her, so I started yelling at her “C’MON! LET’S GO! HUP HUP Let’s GO!!” as we crested the hill. I felt sorta bitchy doing it, but she was going slow and I didn’t want the people behind to catch us and besides, it was all downhill to the finish!! Thankfully, I beat her. I apologized after the race for yelling, and she was a good sport and said she actually appreciated it because it made her find that extra gear and get moving even though she was exhausted.

My two favorite Aussies! The 3 best friends together again!

APUNSC had a pretty good couple of weeks, some incredibly results from some people and some things to be desired for others. But I have to say, this is one of the best teams I think APU has ever had in terms of a group of people who really have fun together, respect each other, and really encourage and motivate each other. I’ve never had more fun.

Q: How many skis can you fit in a bag and still make it under 50lbs? A: More than you think, but you better be prepared to carry 12lbs worth of bindings in your carry-on.

Tyler, Thomas and Eric sporting our new travel threads from Craft and simultaneously moonlighting as techies with snacks.

We’re back in Anchorage now training and doing some local races before heading to US Nationals in January. The snow cover is thin, but the skiing is remarkably good. Even so, ***Think SNOW***

Unfortunately I was traveling alone by this point or else I would have taken FULL advantage. If you’re traveling through Seattle N terminal, please take a picture and show me!!