It feels pretty surreal to be at home right now. This was my first Christmas in the US, let alone at home in years.  Three years ago I was in Ramsau, Austria and fell while running on Christmas night… I broke my wrist and then continued to finish the 9-stage Tour de Ski with a broken bone. The following year I was in Oberhof and it was warm and raining – we “skied” on brown dirt-snow waiting for the first stage of the Tour. Last year I was in Davos preparing for the Tour yet again.  In the past the Tour de Ski has traditionally started Dec 28th or 29th so Christmas has been all about business and preparation.  This year is obviously much different in that I was AT HOME for Christmas!  My “period one” trip to Europe consisted of 12 days and three races. It was brief but it was oh-so-much fun!  I returned to Alaska December 17th and don’t take off again until January 11th.  That’s 3+ weeks at home to enjoy winter in Alaska. I raced my first Besh Cup (!) spent some quality time with my family (including parents) at Christmas and am getting in some good training hours.  I calculated it yesterday and if I race everything I want to race in the next 3+ months I have 569 kilometers of racing left this season.  Hence, the training period that I’m in the middle of now!  The rest of my APU teammates left for US Nationals in Houghton, Michigan this morning so I’m solo yet again.  Luckily there are lots of good skiers in the Anchorage area to pull together as training partners.  Here are some photos from the last two weeks to tell the story of being home! 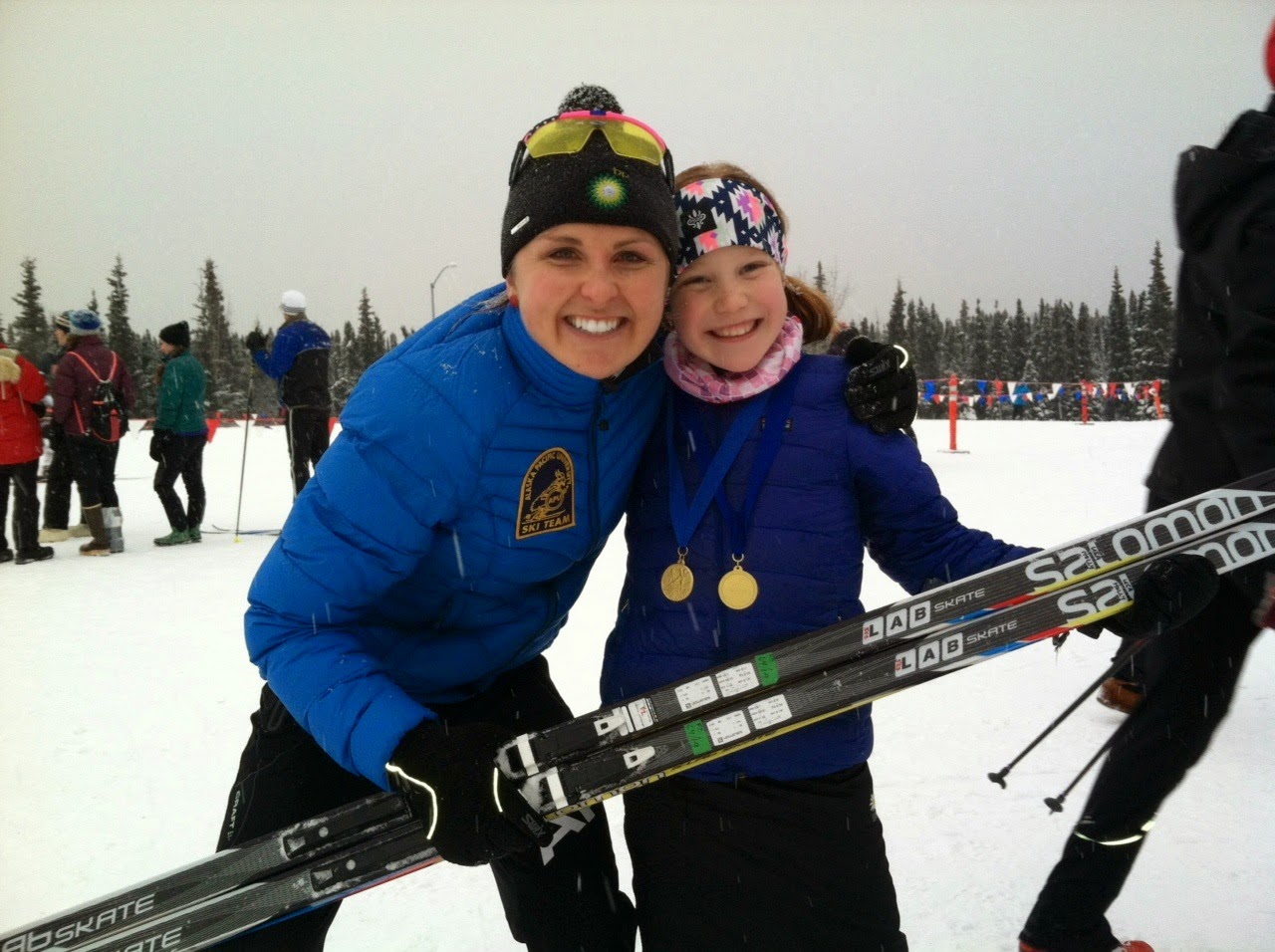 With Sam after the Besh Cup
Fun racing my first Besh Cup!  In the past I was always coaching at Besh – or, I was in Europe. It was great fun racing home trails and getting cheered on by friends and family. It was fun looking around at the race to realize that many of the racers and/or coaches are people whom I’ve coached in my past life! (Fun aside, Anson Moxness, who I coached, is coaching at West High School – my first coaching job.  He has 160 kids on the high school ski team roster making it the BIGGEST high school ski team in the entire country. That makes me really happy! Nice work Anson!) 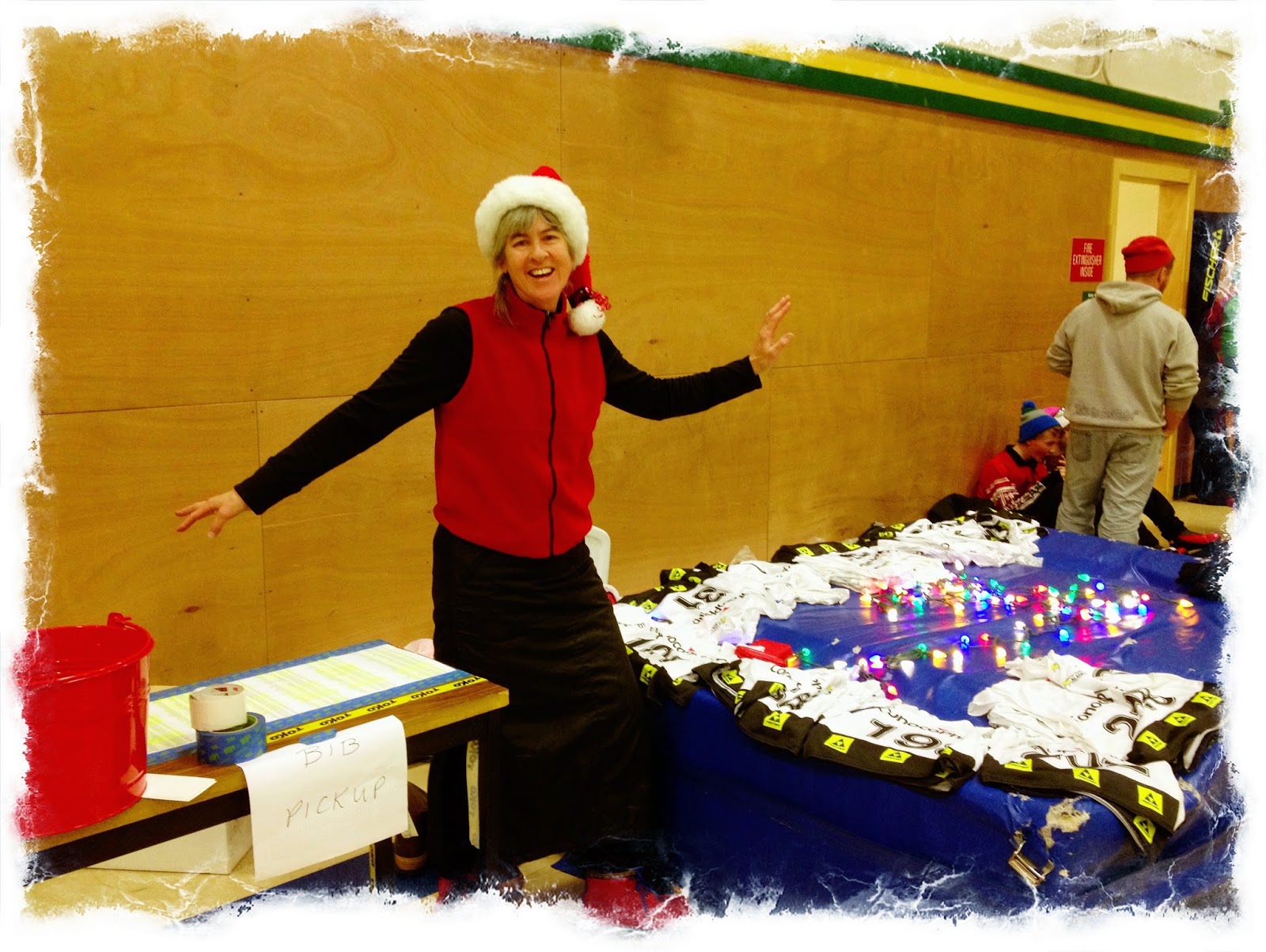 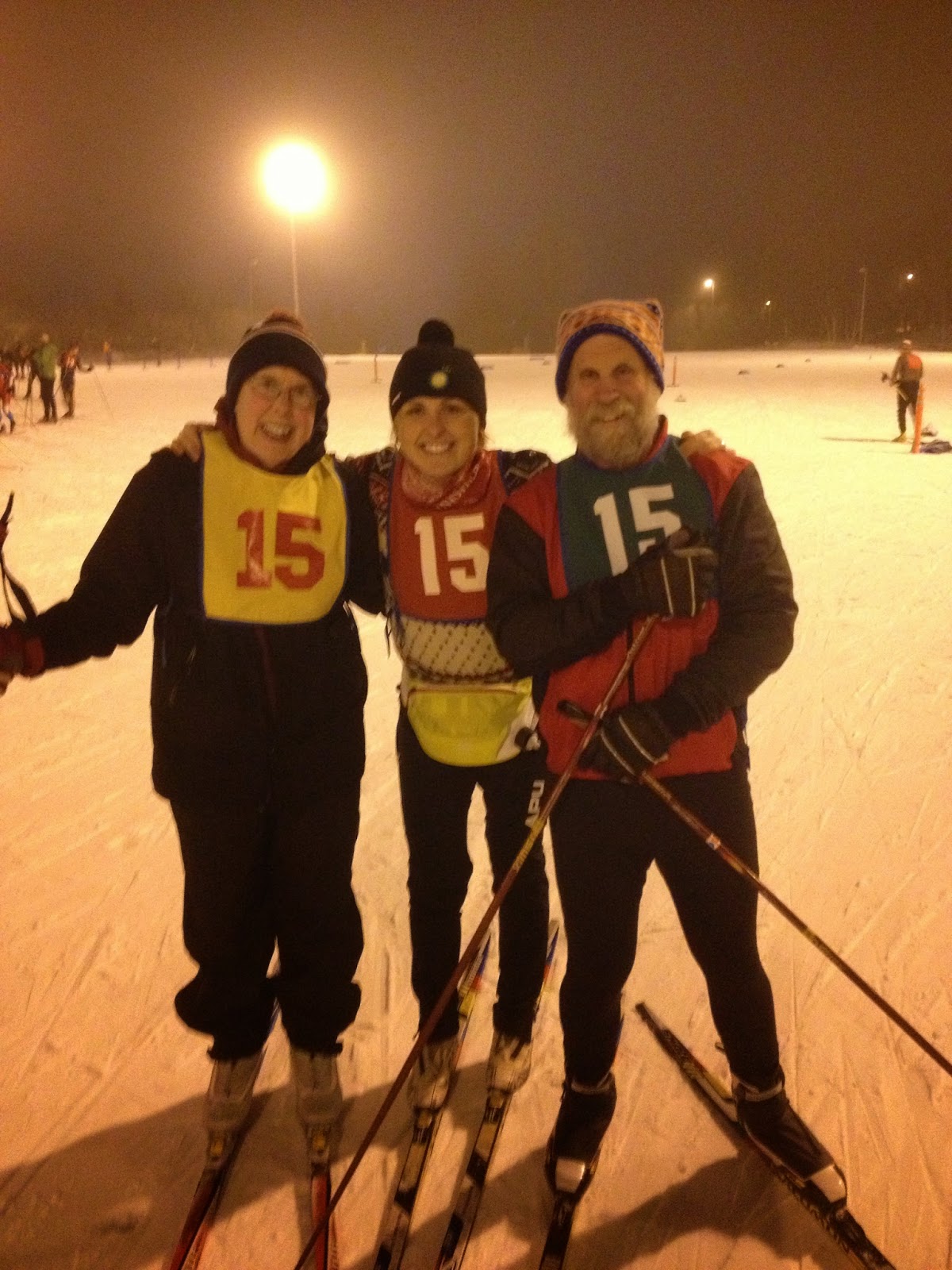 My parents flew in on Dec 23rd for a week long visit.  Just two hours after landing in Anchorage we were out at Kincaid Park to compete as a team for the AMH Friends and Family relay. It was my mom’s first ski of the year! I was proud of my parents for rolling with the punches and being good sports! 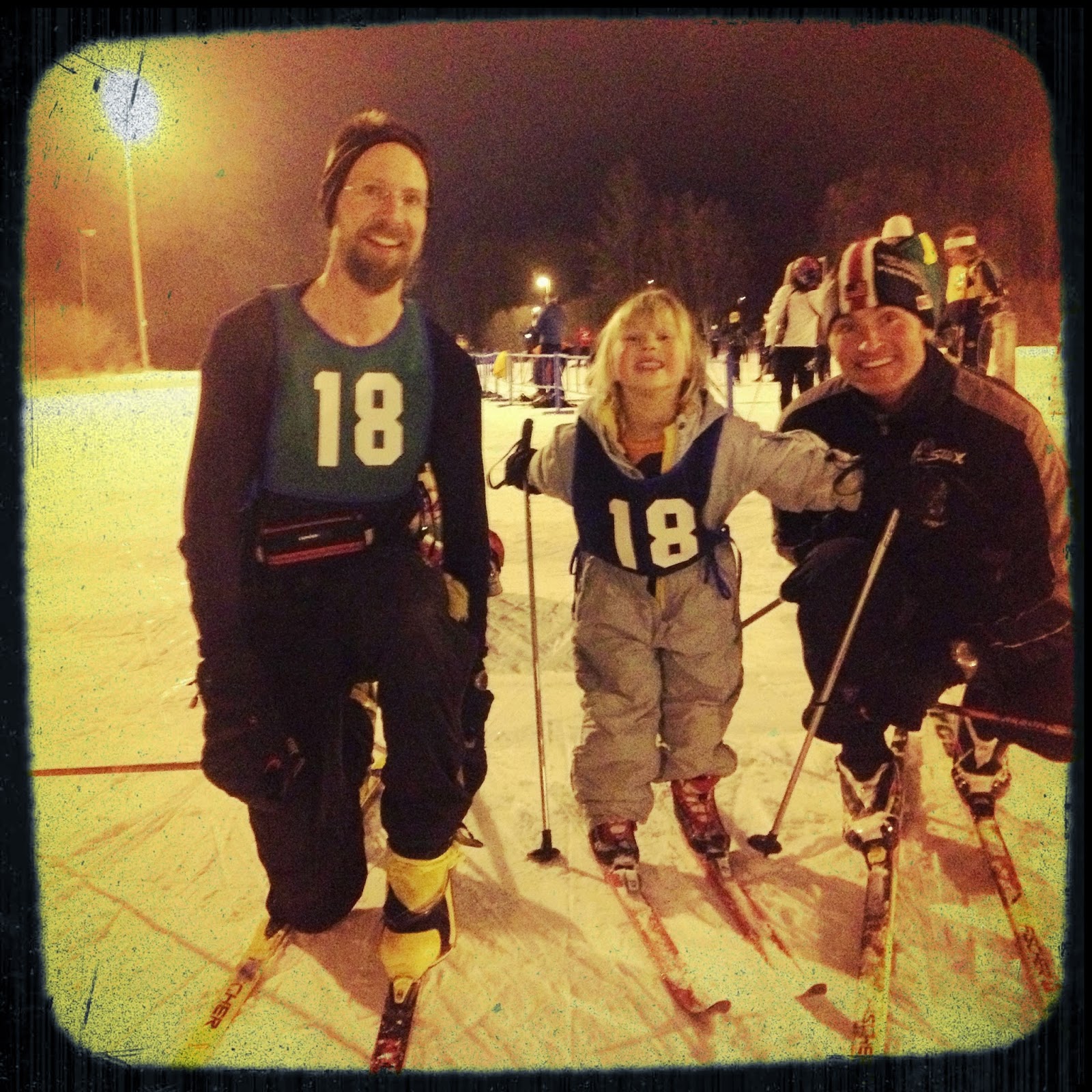 That same night it was my niece’s first ski race!  She’s only 4 years old and did a great job! 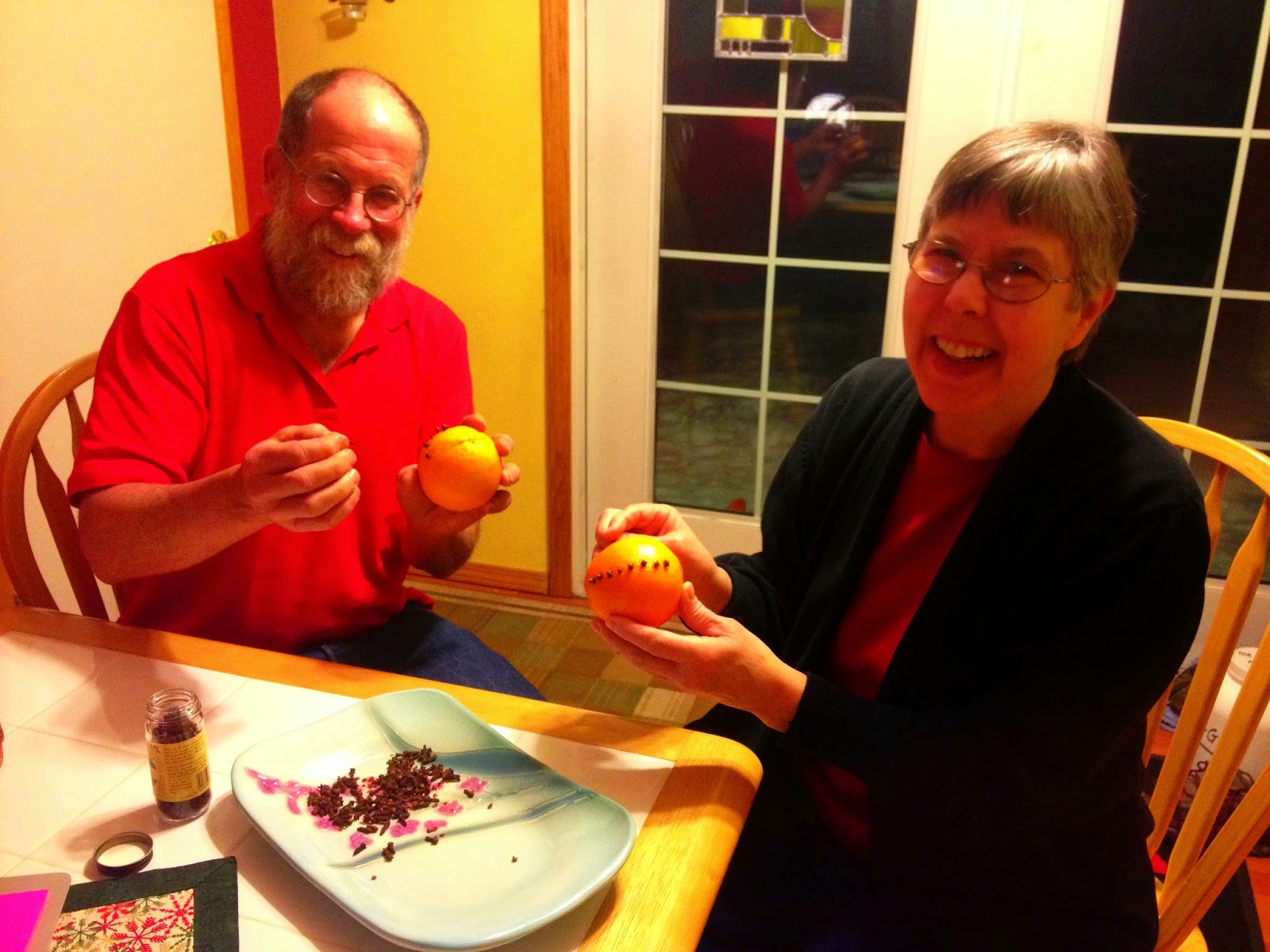 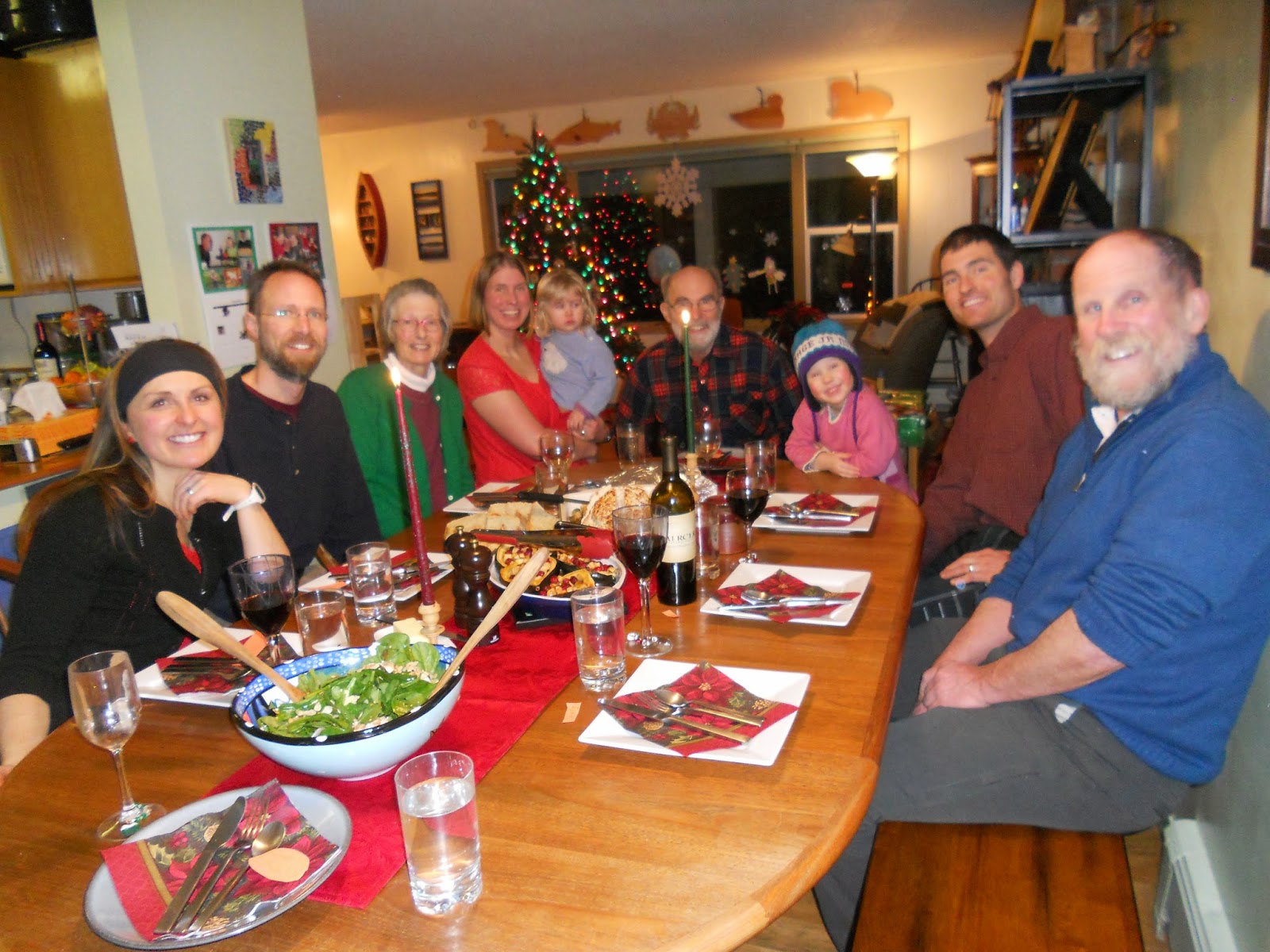 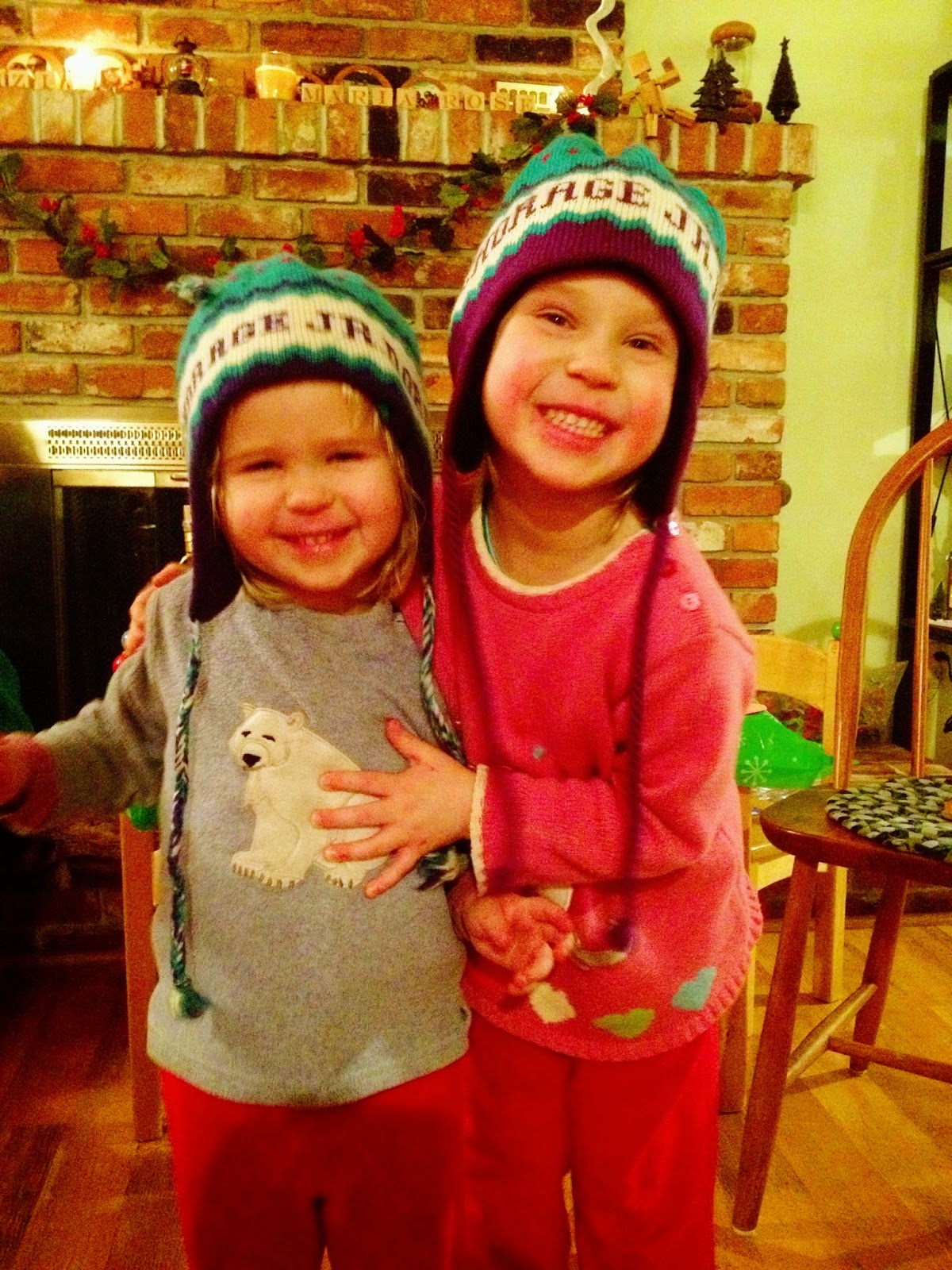 Way too cute! My nieces with their new (and slightly premature) Junior Nordic hats. Sometimes it’s just too easy to get excited about young family members skiing 🙂 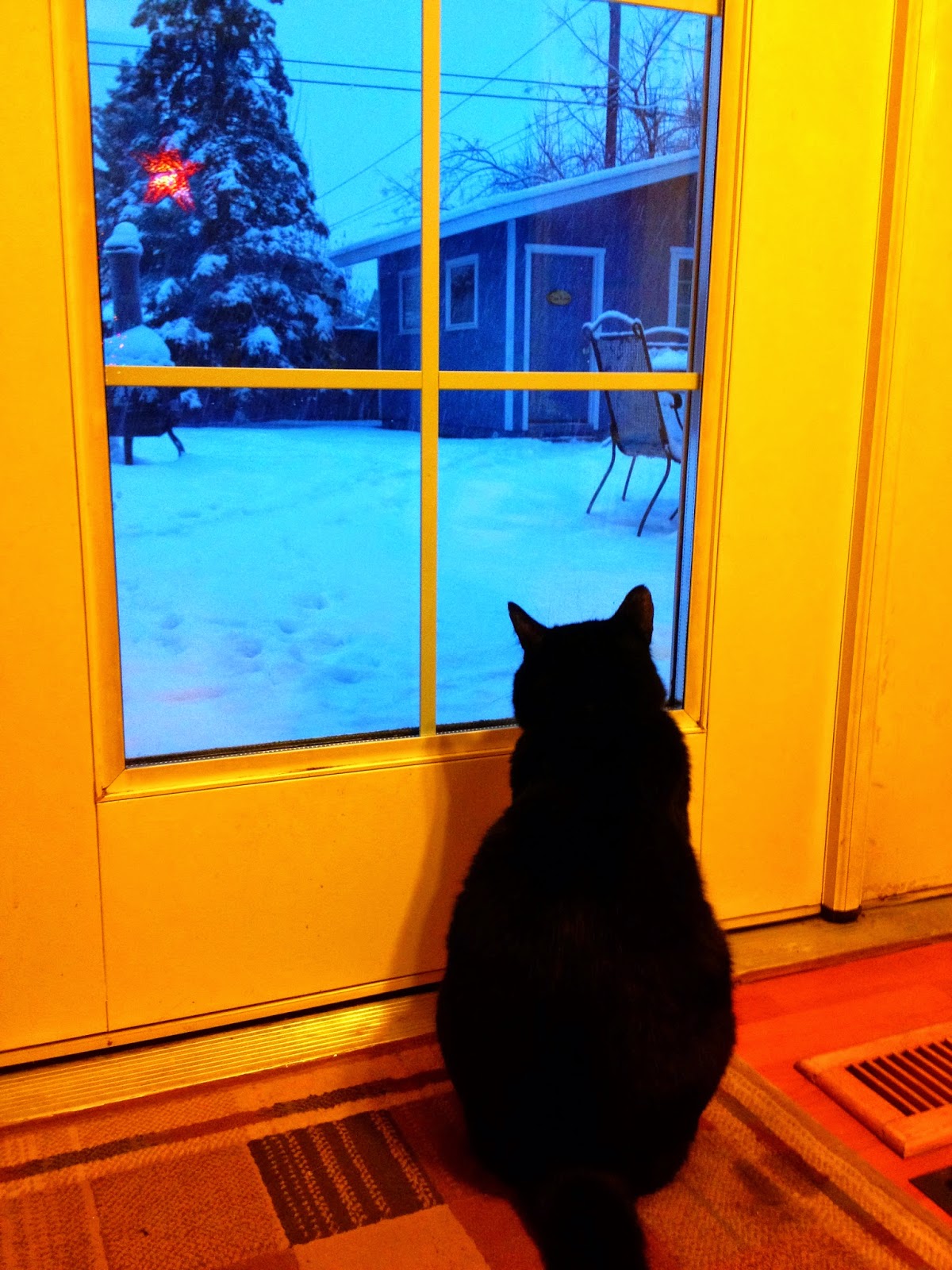 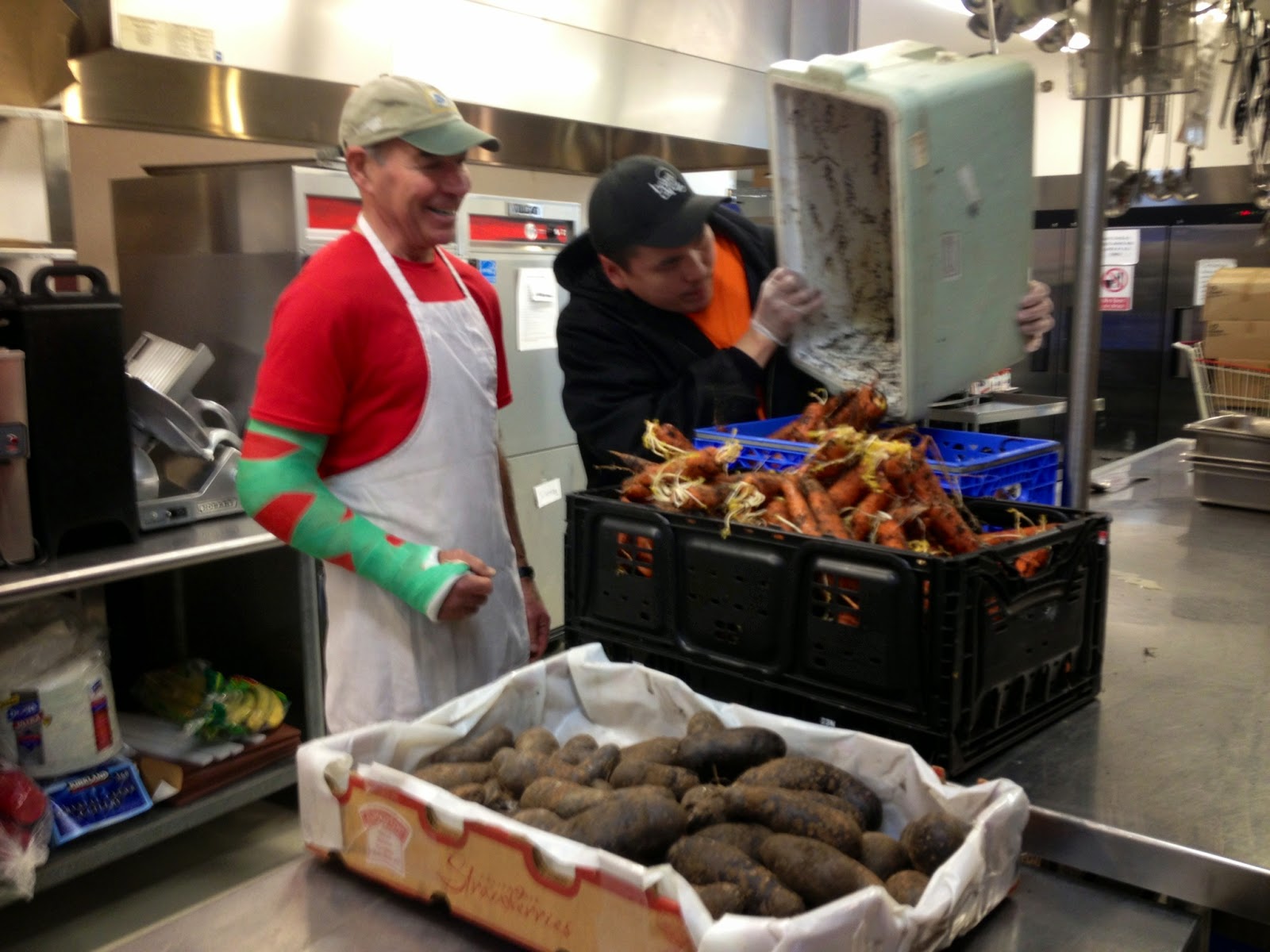 On Christmas Day my family headed to Beans Cafe to volunteer with the Ronsse crew of Dennis & Annie, Katie & Justin Libby, and Amber Walker. Unfortunately Dennis has another broken elbow but was making the best of it with a green and red cast.  Dennis and Annie brought a beautiful load of organic potatoes and carrots for the cafe. They’ve been donating from their garden and root cellar for years which is very, very cool! 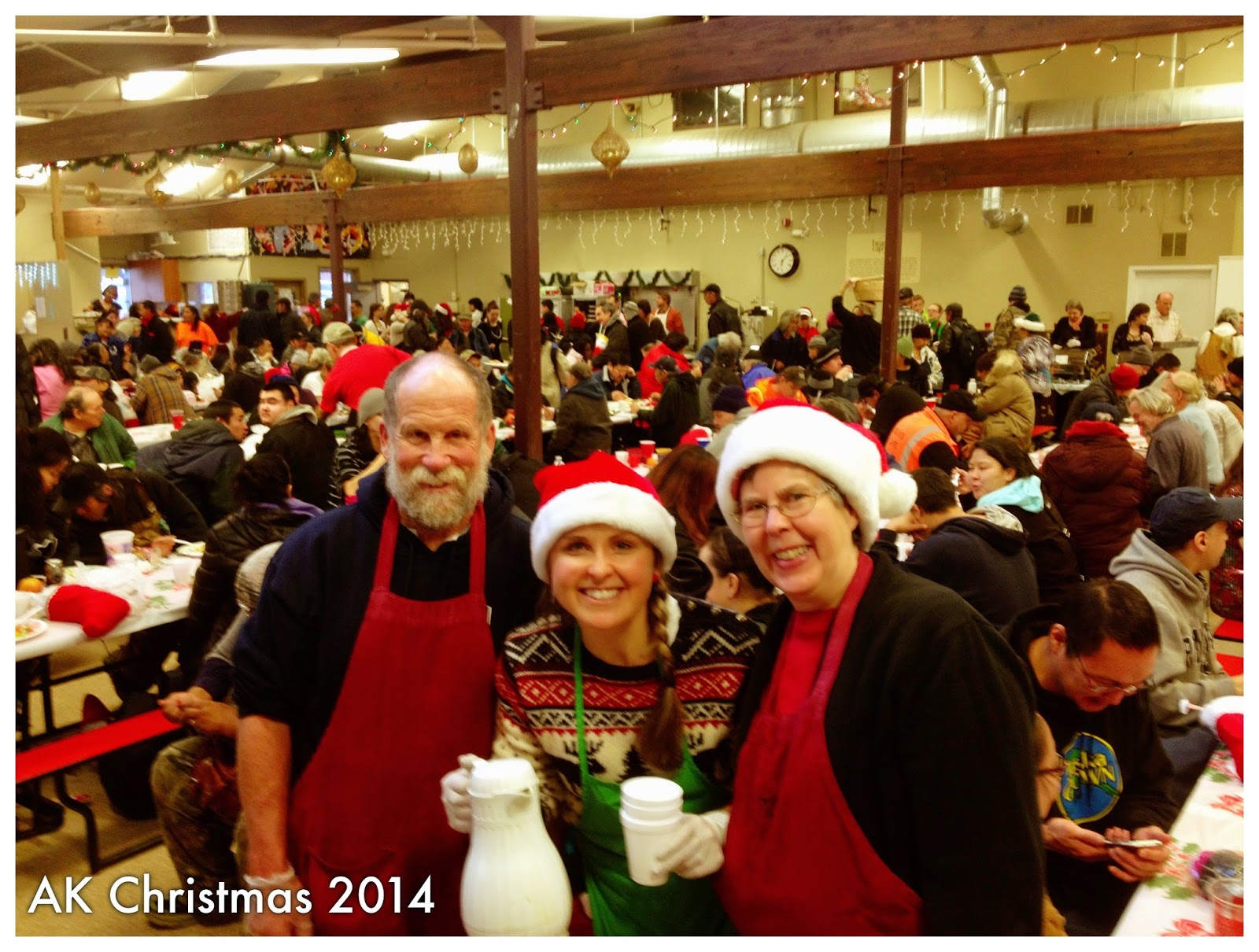 A fun way to spend Christmas – we helped serve over 800 meals! 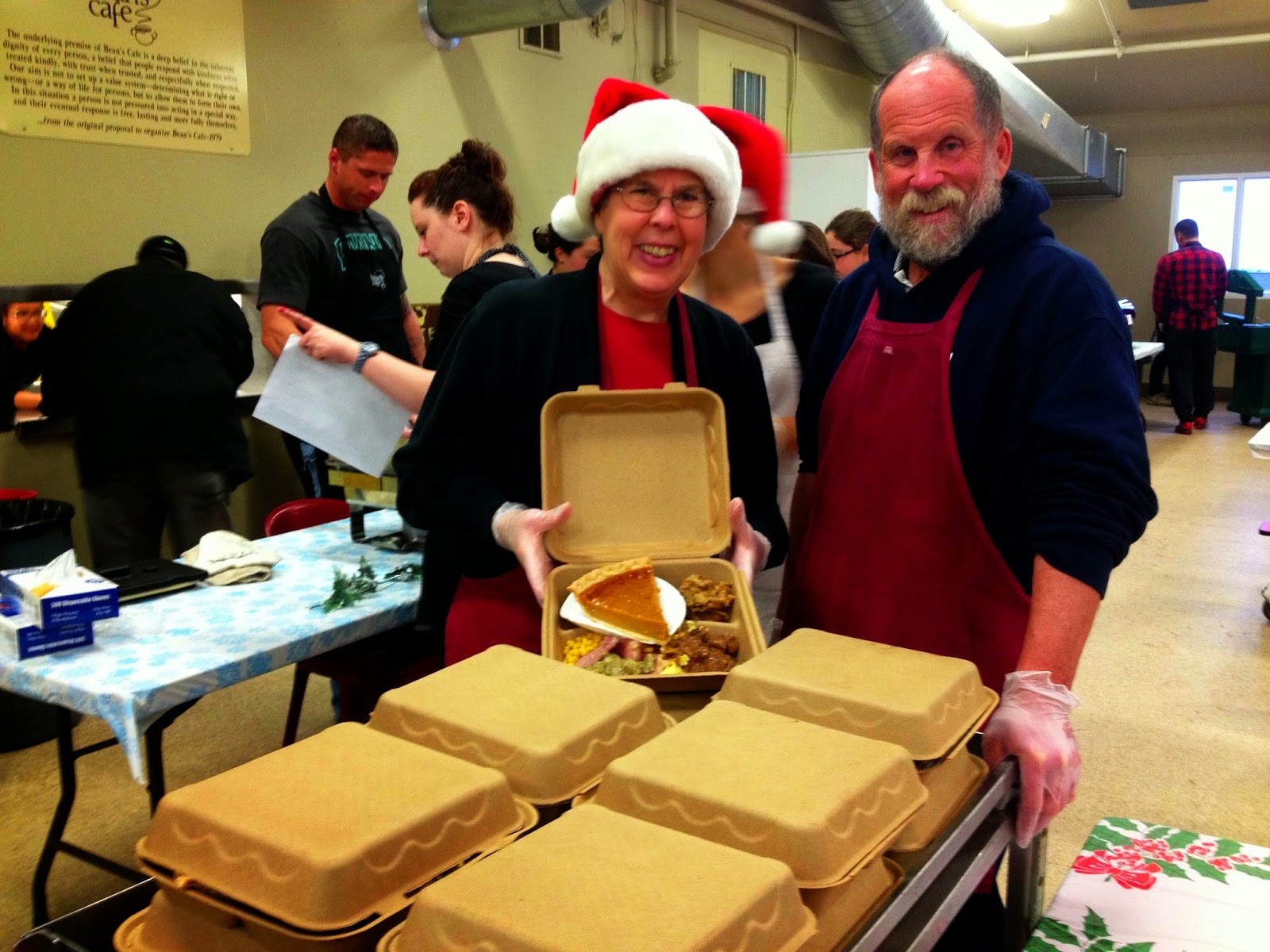 My parents making “to-go” meals for folks at the Brother Francis Shelter. Beans Cafe provides an amazing service to people in need of food in Anchorage. I believe that Bean’s Cafe is part of Alaska’s Pick Click Give Campaign. 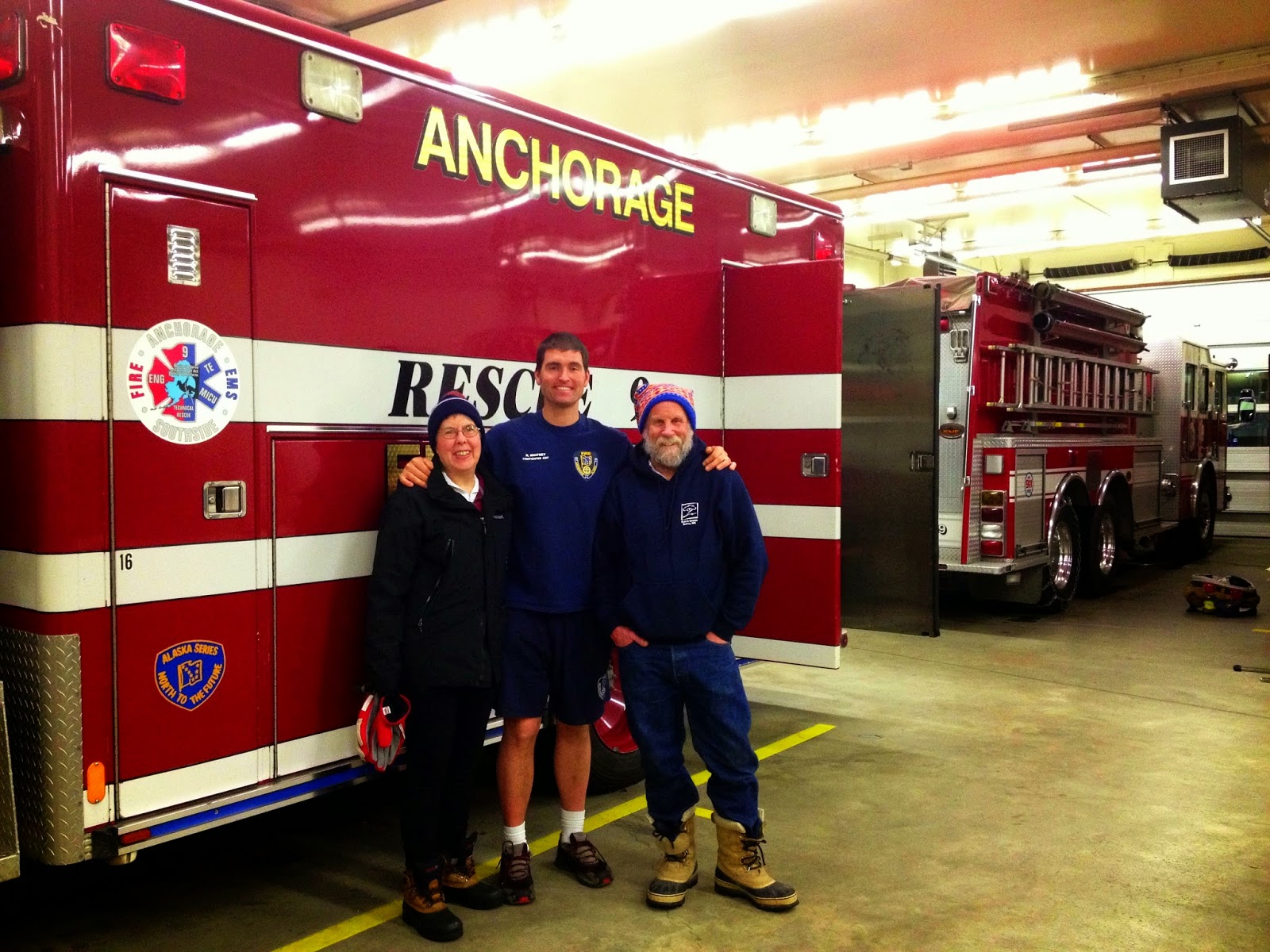 After Beans & Training we paid a visit to Rob at the Fire Station. While most folks have holidays such as Christmas off Firefighters and emergency responders are always at work, prepared to help when needed.
After the holiday we headed to Hope, Alaska.  We’ve been working on this place incessantly (correction – Rob has been working!) for the past four years. It’s literally been Rob’s project since I have been skiing full time…. The cabin was originally inspired by my family’s cabin at Snoqualimie Pass in Washington State.  I learned to ski skiing in and out of the cabin growing up and all my fondest memories from childhood  were at the family “stugan” (Swedish for cabin). This has been a HUGE project and we’ve been lucky to have help from friends and family. It was really special to share it with my parents for the first time! 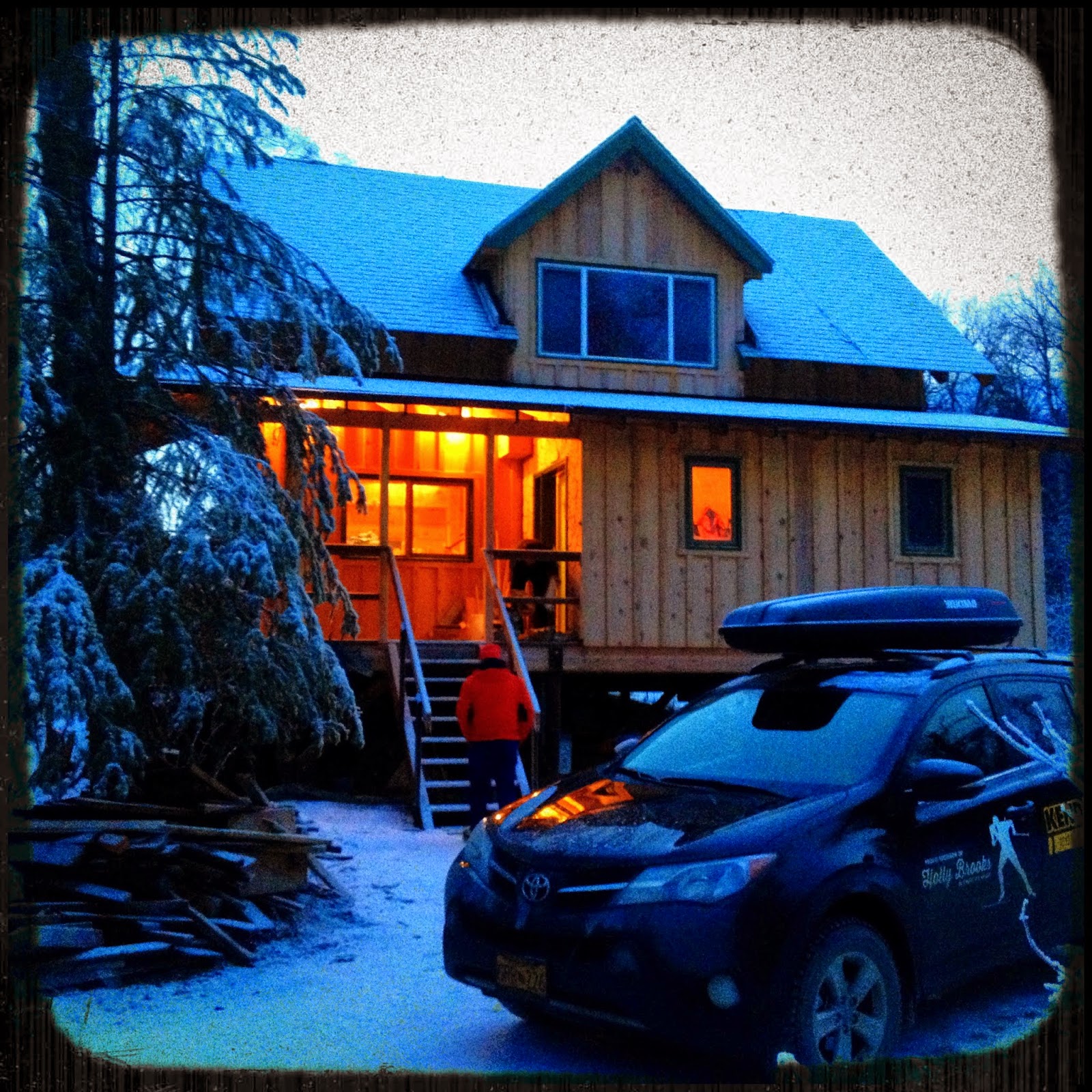 Inside view from the couch…. fun to display some of my ski paraphernalia as it doesn’t fit in our 850 sq foot house! 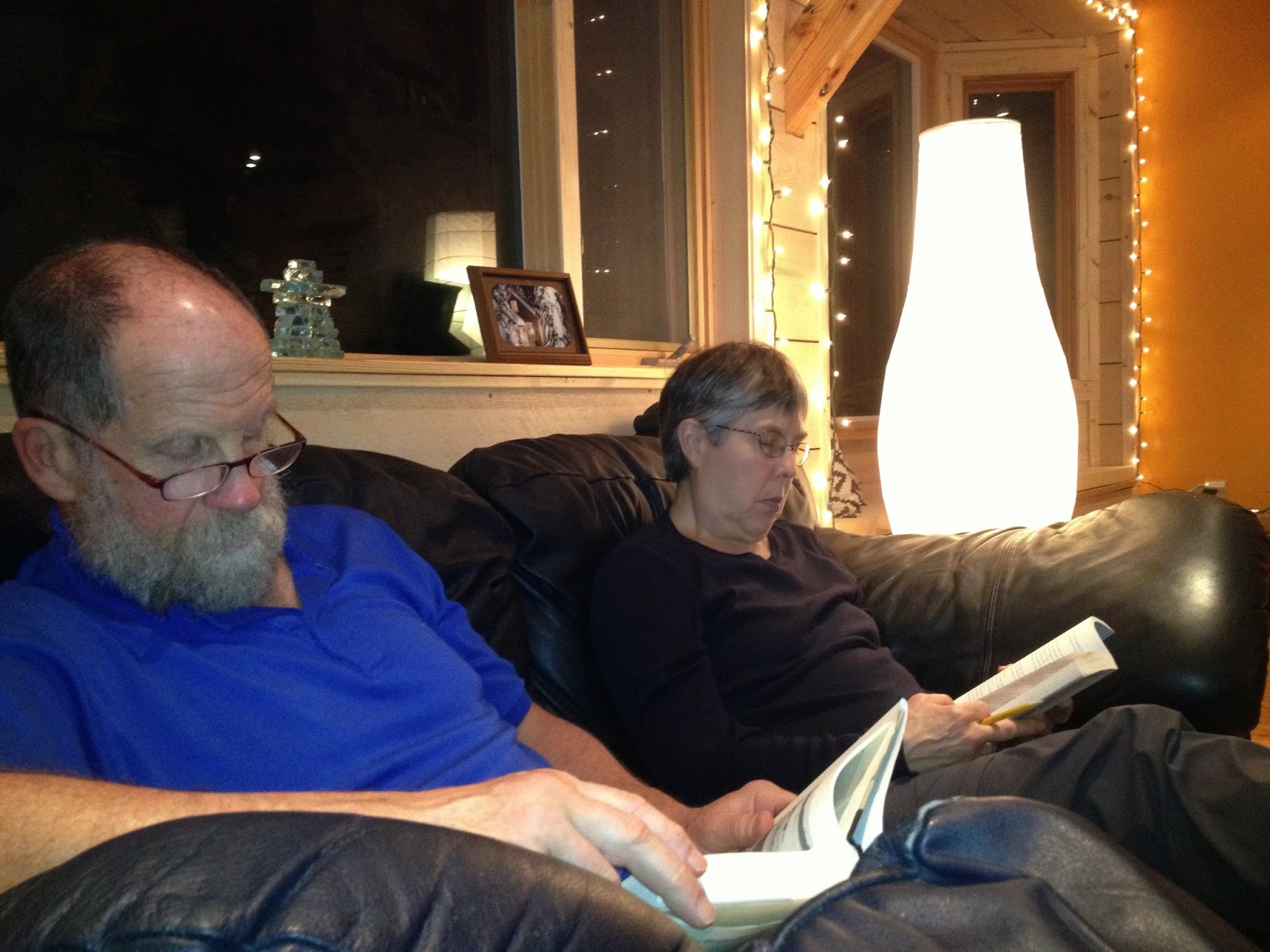 Mom and Dad getting their read on! 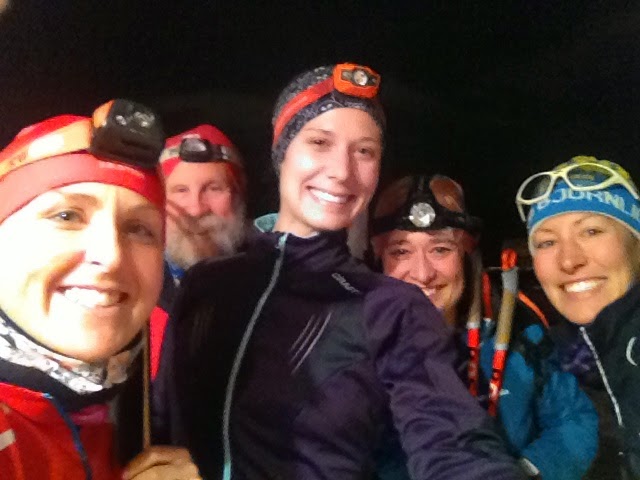 Just one of the many things I love about Anchorage….. I’m able to pull together this many skiers for a 3-hour double pole ski departing from my house – in the DARK! Anchorage rocks and so do all these people 🙂  Left to right: Me, my dad, Greer, Megan & Katie. 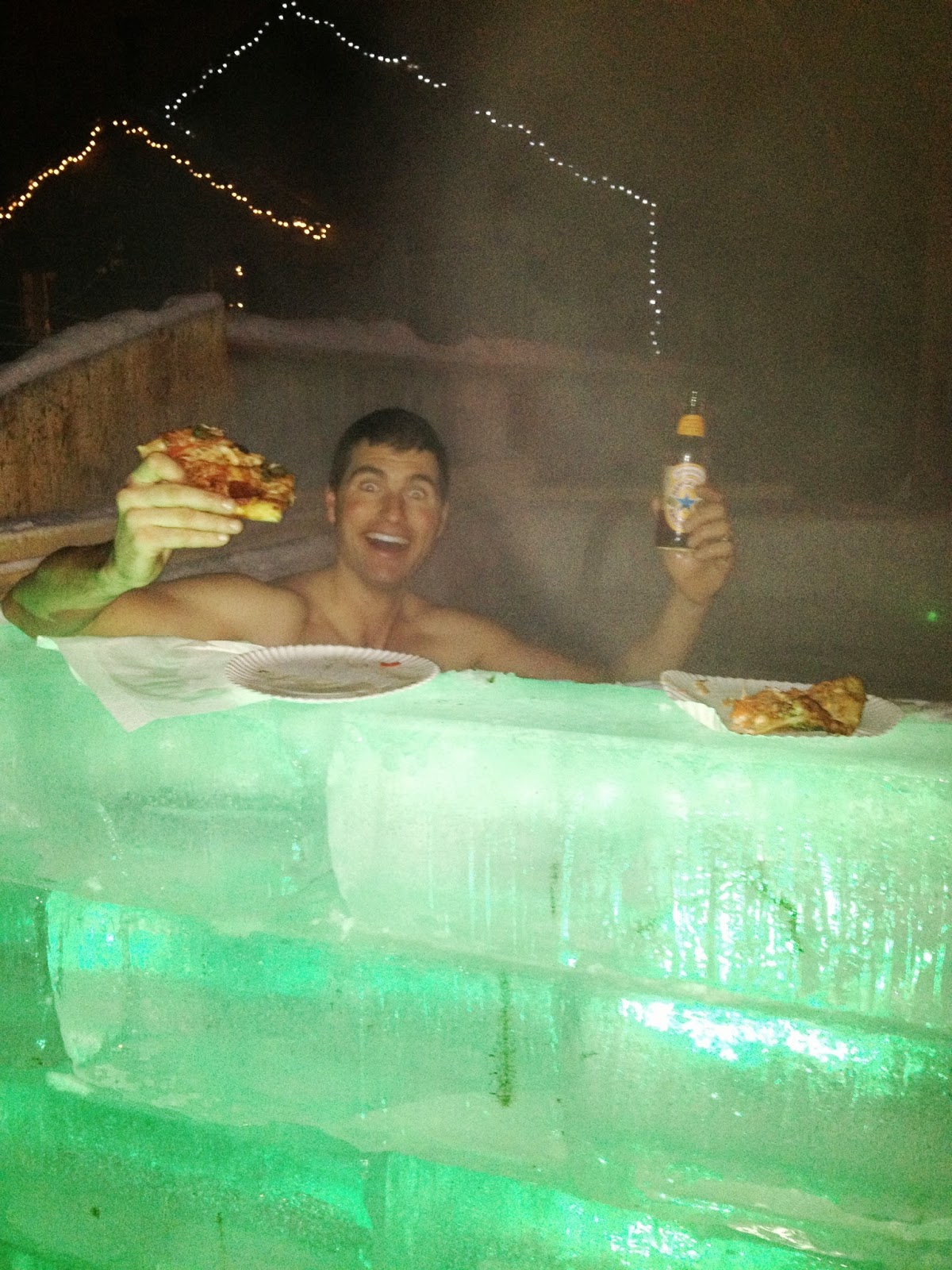 Last but not least, ending on a goofy note. Rob doing the opposite of training. Don, Erin, Austin and Reese through one of the more incredible Christmas parties I’ve ever been too. They built an ice hot tub & ice bar. Rob was the first one to strip down and jump in!  Then someone brought him pizza and a beer…..
Happy New Years Everyone!  Be safe and have fun!
More soon,
Sincerely,
Holly
ATHLETE FEEDS
Davos Camp